Lost in the Fire, Stimulus for Understanding

Another task in my recent writing class was to imagine a character who had lost everything in a fire.  All people and animals are fine, but the belongings, the “stuff” of their life is gone.  I did not need a moment.  My hand flew across the page and by the end of the short assignment, I came to a startling realization about my mother.  My sister and I have spent the past two years creating time together to look through all of my mother’s memories beginning with clothing and continuing with personal letters and important papers.  Over and over again we exclaim, “Why did she save everything?”  I have come to a happy conclusion and am once again in awe of my mother’s ability to transcend time and space to visit us and remain an active part of our lives.

Lost in the Fire

She slowly sat down on the curb, letting the officers words sink in, “There is nothing left,” what did that mean?  She mentally walked through the small house, one room at a time, (there were only three) and now somehow, what had seemed so small, suddenly seemed filled with so much.  Each closet had held years worth of memories organized on shelves; those that no one knew of, others she didn’t even remember, and now, without the visual reminders and tactile images, those memories would be lost forever.

There had been boxes of family photos dating back to the 1870’s sealed with ancient tape, and too many albums, the oldest photos pasted on black paper with curly script descriptions and names of unfamiliar people who had immigrated, leaving all of their belongings behind, she was not so different from them now.  All of the lovely cards from her father’s train travels as a salesman for women blouses written in flowery prose to her sister, her mother and to the child she once was, were lost along with the Western Union Telegrams with short messages stating safe arrivals in other states. There had been collections of timeless watches, cuff links now obsolete, tiepins from her father and embroidered handkerchiefs from her mother.  Memories no longer relevant in today’s disposable world, yet cherished objects that had been held in the hands of her loved ones.  She had everything.  She was the last in line and as loved ones departed, their precious mementos became hers.  Three sets of china and crystal wine glasses that had toasted happier times could not withstand the intense heat and flames and the silver whose patterns had been carefully selected and listed on wedding registries were molten globs of useless metal.

The books, there had been hundreds carefully organized by genre, favorite short story collections, architecture, poetry and the history of the city she loved.  There were picture books, the most special and those signed by authors reflecting a second career managing a children’s bookstore. The books were gone too, and in a sense, part of her that was irreplaceable.  She was older now and her memory lapsed when trying to conjure up titles and authors.  Files of papers she wanted to save, to refer to and relive another day were ashes now.  The years she had spent teaching had been housed in one file box including letters of admiration from former students and the most precious, the certificates, accommodations and articles about her innovative teaching style in the educational journals.

Who would remember now?  How would her family know who she was, who she had been, after she was gone?  The mementos were really not for her, after all, but for her daughters, so they would know who she really was, for she was far too shy to boast and thought they would be bored hearing about those long deceased relatives-people they had never known. She had always meant to write things down, to create a family history, a journal but life had been busy and the later years consisted of medical appointments, senior classes at the Community College and occasional lunches with the ladies (her posse of four).  Suddenly she noticed that reading with fading eyes was strained and writing with stiff hands became a challenge she was too tired to tackle.  The memories were the links to the past and now that past was gone.  She sat wondering, imagining a journey, slowly fading, becoming lighter, paler, quieter, ceasing to move and even a drop of water on the tongue became too much to bear. 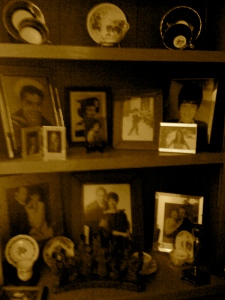 2 responses to “Lost in the Fire, Stimulus for Understanding”